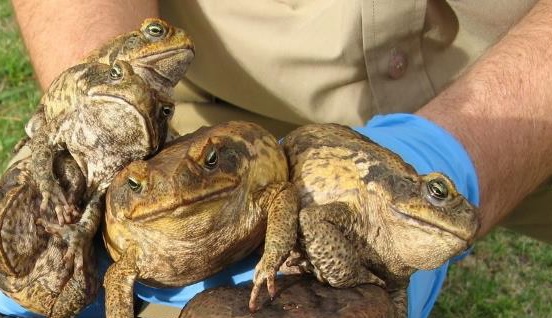 Clear space in the freezer because the toads are here

It’s that time of the year where no one wants to take out the rubbish in fear of encountering a cane toad. While the look of these hopping horrors is scream provoking, Fitzroy Basin Association Inc. (FBA) warn it’s a whole lot worse for our local environment and native wildlife.

It’s common knowledge that toads are poisonous, however, how much so usually goes unsaid. Cane toads store a cocktail of highly-toxic poison in their warty skin, which they secrete through two large glands located behind their ears. To humans’, toads are relatively harmless and no one has ever died from a cane toad in Australia. However, it’s not the same story for our wildlife.

Cane toads are venomous at all stages of their life-cycle. If eaten, the venom from one cane toad can kill or paralyse animals such as goannas, quolls and blue tongue lizards. Additionally, toad eggs and tadpoles leech the same poison into the water where they live, stopping water predators from eating them and drastically increasing their chances of survival.

Regarding the diet of cane toads, they eat anything they can fit in their mouth – meaning the bigger they are, the more they can prey on. This includes insects, frogs, mammals, small birds and even their young! Interesting, large cane toad tadpoles can eat cane toad eggs (with their five rows of tiny peg-like teeth)! With so many ways to kill native animals or outcompete them for space, toads pose a real threat to many Australian animals. What’s worse, few native species can fight back.

Keelback snakes and wolf spiders are the only animals who are immune to the ingested effects of cane toad’s poison. A few rat species along with some clever native birds (including the bush stone-curlew) have worked out some cunning tactics to eat around the toad’s poison glands. However, other than these few natural enemies, our wildlife relies on us for help.

Thousands of cane toads are caught and killed each year, but there are still plenty more out there. Give the native animals living in your local environment a helping hand by humanely removing the cane toads who also live there. RSPCA states that the two ways to humanely kill a cane toad is either by cooling followed by freezing or (for those who don’t want to touch the warty creatures) the aerosol spray Hopstop®.

Early next month Greening Australia will be running a toad catching event in Rockhampton. This event is a fantastic opportunity to rally with other likeminded community members and get rid of some toads. If you’re interested in attending this event keep an eye on FBA’s online event calendar – http://fba.org.au/calendar/.