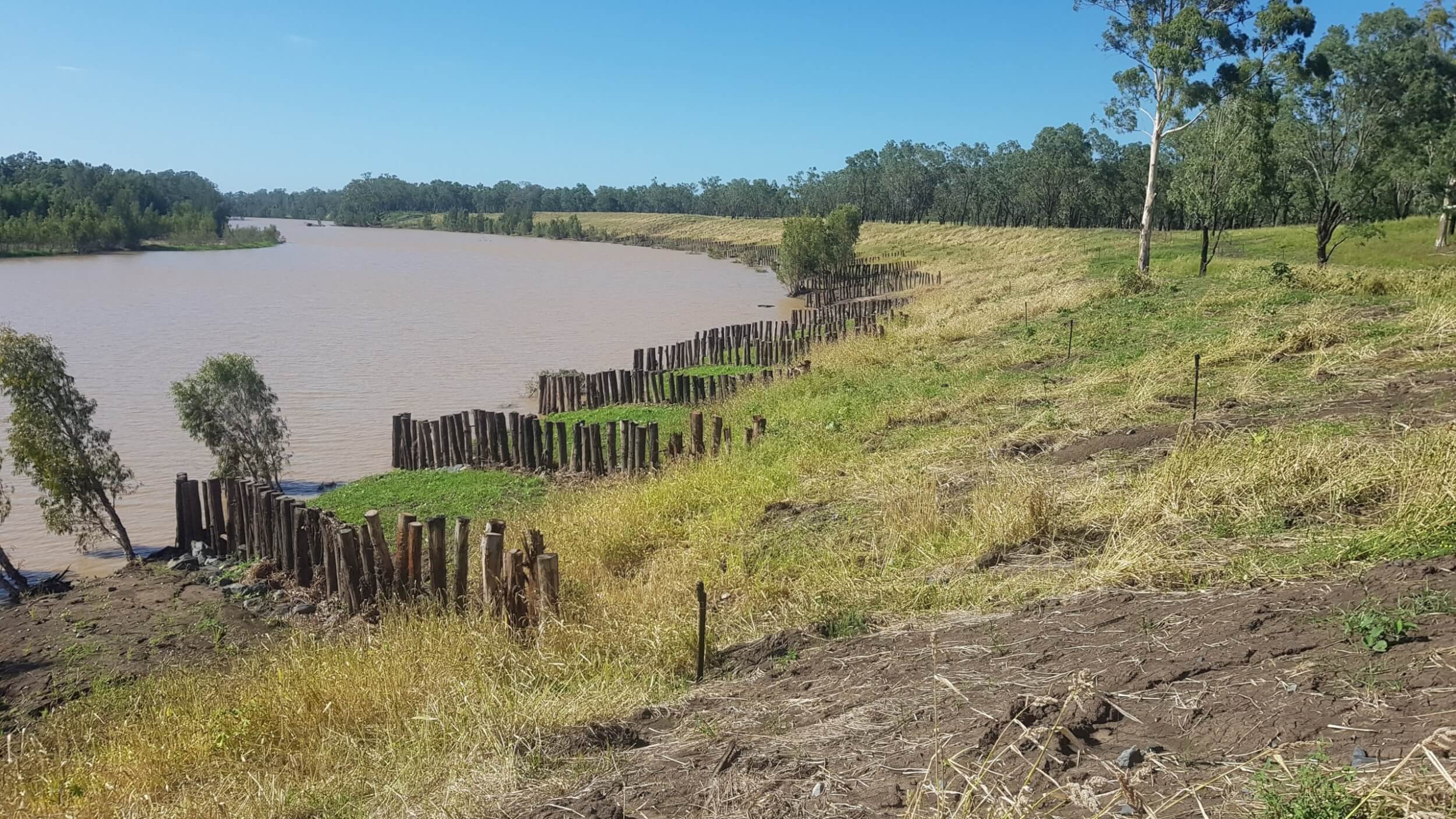 The Fitzroy Basin, in Central Queensland, drains into the Great Barrier Reef lagoon near Rockhampton. The floodplains of the lower Fitzroy River (Toonaba) have undergone extensive changes since European settlement in the area.

Significant erosion has occurred throughout the catchment since the 1950s resulting in excessive sediment loads being delivered to the Great Barrier Reef.

Following the flood event associated with tropical cyclone Debbie in 2017, FBA worked with state and local governments, Alluvium Consulting, and other stakeholders to develop a restoration plan to reduce sediment loss and improve the health of the river ecosystem.

The riverbank had been deeply eroded and unstable masses of soil were breaking off into the Fitzroy River contributing to sediment flowing downstream.

Work on the South Yaamba project Site 8 was started by FBA in 2021. The aim of the site works is to stop over 14,459 tonnes of sediment per year from entering the Great Barrier Reef lagoon.

As the fourth project of its kind, FBA has developed a reputation over the years as an organisation that has far-reaching knowledge in major stream bank repairs. This $4 million outlay included a $1.9 million civil construction tender necessary to achieve the sediment savings.

To avoid existing and future erosion, engineering design required extensive battering of the bank followed by installation of pile fields, construction of rock chutes and planting of native riparian vegetation to stabilise the battered bank.

Stabilisation of the riverbank is nearing completion with over 4km of pipe and 170 sprinklers installed by a local irrigation contractor, prior to Christmas 2021. A separate local contractor planted over 9,000 trees in a three-week period.

Local tree consultant Steve Elson was engaged to create the Site’s planting methodology which included distribution of plant species, advice on planting at optimal depth. He advised a minimum of 20 litres of water at planting to ensure adequate moisture is received at the roots to improve survival chances. Steve’s incredible knowledge of native vegetation has helped thousands of seedlings thrive in central Queensland’s variable climate on many successful projects.

With over 200mm of rain on site at the end of 2021, the stabilisation work was tested while delays were experienced by the irrigation and planting teams.

The site held together well during the storms while the river level increased three metres. Some sections of the toe were washed away in some isolated sections.

Existing trees purposely left on the toe where they were established before the project stabilised the areas and no major damage was evident. This supported the strategy behind the restoration project and the importance of trees in reduction of sediment losses.

The Fitzroy Water Quality Program is funded by the partnership between the Australian Government’s Reef Trust and the Great Barrier Reef Foundation with support from Fitzroy Basin Association, Greening Australia, Verterra and Catchment Solutions.